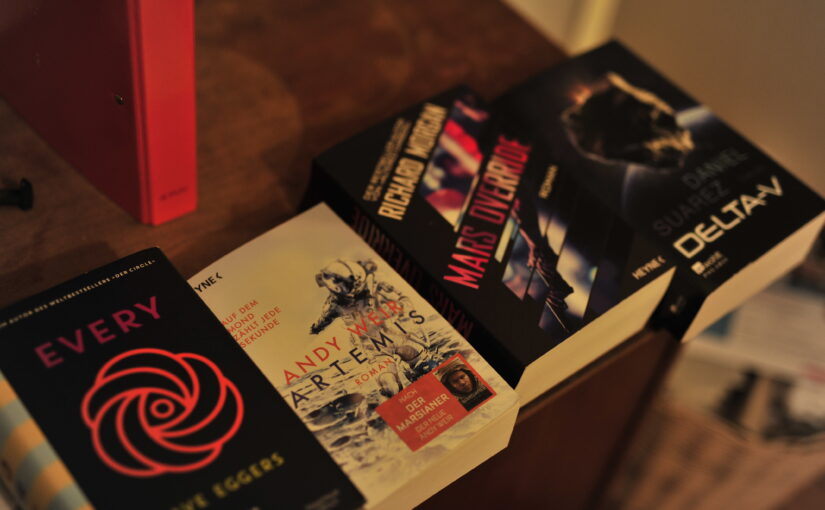 4 contemporary books by some of my favorite sci-fi writers who have proven with their earlier works that they can write good, even exceptional books. During the last months I read their latest works, all written in 2017 to 2019 and my thoughts are as follows.

Dave Eggers „Every“
His first work „The circle“ was about a tech-company with a heavy reference to facebook. In this book ‚Every‘ is a company which is a fusion of Facebook, Google and Amazon, shopping, socialising, data control and self-oranzing/-measuring, all in one. The story is about a woman who is set to destroy this company from within, but ends up.. ok, no spoilers from me. The book is written in the same style as „The circle“, but is way too long to be entertaining throughout, it gets boring after a while and the further the story goes, the more uninteresting the not-very-deep-from-the-start characters and scenes become. The ideas he presents are quite fascinating though and one always asks himself if some of these ideas could become reality. So, the writing and characters and what they do are mediocre, but the setting and ideas well done.

Andy Weir „Artemis“
„The Martian“, his first book, had me gripped and wanting to read in one go, which I more or less did (happens seldom). This one here has the same attraction, altough it is different. „The Martian“ was a Robinson-Crusoe-fight-for-survival on Mars with an exceptionally well done scientific and technological approach, entertaining and highly interesting. In „Artemis“ he tunes down the scientific approach a notch and adds some detective-like story elements. A double-edged thing: still an interesting read, but looses the fascination of the hardcore scientific approach and being unable to reach the class of really good thriller or detective-novel writers. Still, a very good, entertainig read.

Richard Morgan „Thin Air“
One of my all-time favourite writers, with his Takeshi Kovaczs „Altered Carbon“ trilogy, this one here is somewhat of a disappointment. It starts very well with the same hard-boiled-sci-fi-special-agent-one-man-army style of story spiked with futuristic technological details but drifts into violent brutality and over-over-constructed story twist the further the story goes and the last third of the book was really hard to read. Sure, i wanted to know how it ended but was kind of bored out with the gory descriptions, two-dimensionalty of the characters and unrealistic scenes. Sorry Richard, this one here is not good.

Daniel Suarez „Delta V“
One of my other favourites, especially „Deamon“, „Kill Decision“ and „Bios“ have been fascinating, somehow terrifying (and terrifyingliny good) Sci-Fi books. And this one here is another one, I´d even say this is his best book so far. The topic is asteroid mining and one might wonder if the story descripted here is already set to become reality or, since in the book the whole operation is kept in secret, is already taking place somewhere in the depths of space. No more words here – this is a must-read for any Sci-Fi, Tech-Thriller fan.