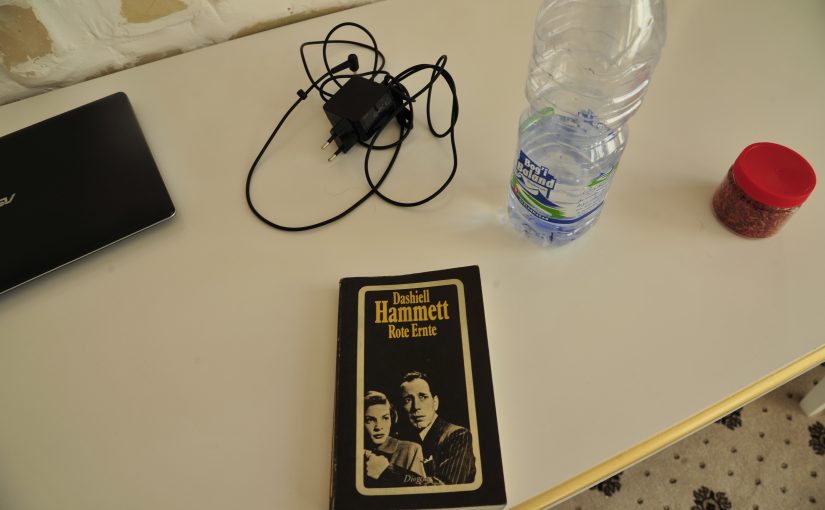 Dashiell Hammett has become one of my favourite authors in only two books, love on the first read if you like. He wrote detective stories in the 20´s and 30´s of the 20th century and is considered the founding father of the hard-boiled detective novel. In this niché category of novels the protagonist is an ambivanlent private detective who has to and will solve a more or less complicated case and people will die on the way. Also these stories include femme fatales, corrupt cops, lots of drinking, shady gangsters, murder and fast-paced action. As I would put it, these are dark Sherlock Holmes stories on speed and exchanging the snobbishness and gentlemanness with starightforwardness and violence. And what can I say, I love this stuff.
I got into him because my favourite sci-fi author Richard Morgan claims him to be one of his incluences and now I know where he got the inspiration for his main characters from.
His most famous story is “The Maltese Falcon” where private detective Sam Spade solves a mystery about some valuable artifact on which said shady persons take a lot of interest in.

But this story is topped by “Red Harvest” which is an absolutely hilarious book.
Anyone knows the movie “Last man standing” with Bruce Willis? If you like the movie then this is a must read. A nameless detective comes into a small town only to find his contractor dead. Turns out he was the son of the old grandfather of this town who got himself embroiled with some gangsters which now more or less control everything. So the detective is hired to clean up and he does this by playing all sides being friend and false friend to everybody. The story itself is quite complex with around 30 to 40 people being involved and its very difficult to find logical flaws because of this complexity. But anyways, if there are any, you wouldn´t notice because the story always goes on and on without time to take a breath. Top notch storytelling. Highly recommended.