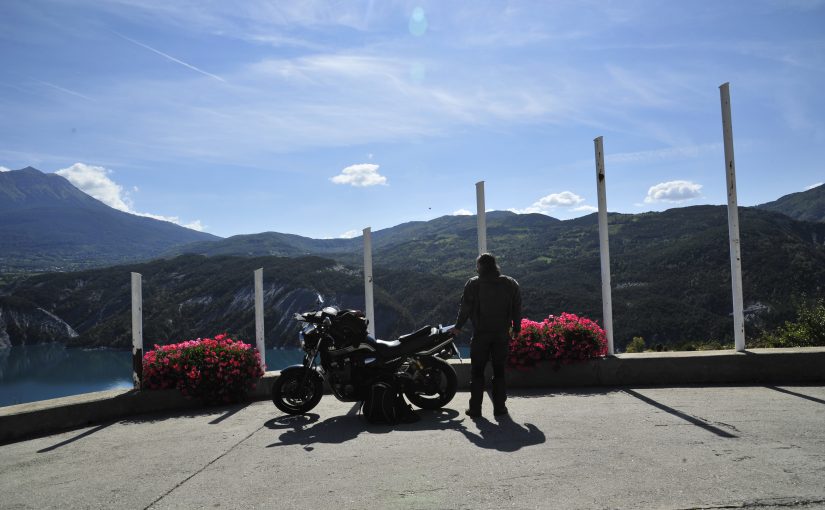 I´ve been here before, 10 years ago, and it´s beautiful to see that nature hasn´t changed a bit. This is how Gorges du Verdon looked in 2008

Different camera, different vehicle, still the same scar in the landscape carved out by the river over the millions of years. And who knows how it will look in another 10 or hundred millions years, will it be deeper, flatend by earthquakes or nuclear catastrophees, or maybe still be the same, serene, beautiful piece of land surrounded by two roads built by man… who knows? All I know is that I won´t be there to see it, none of us actually will. And honestly, it doesn´t matter pretty much. All I want to say is, that WE may change over ten year, pretty heavily sometimes, but for Mother Nature (or in the vicinity of this majestic landscape – Queen Nature) the lifespan of a human is just a fraction… Ahh, I´m babbling. Here´s the story:

My sister had quite an astonishing August, marriage at the beginning (where I was the official photographer, yay) and then giving birth to a beautiful daughter, named Sophia (meaning “Wisdom” in its latin origin) 10 days later; which means that I can call myself uncle officially from now on.

Anyways, busy schedules here and there, I only could see her now, 6 weeks later and decided to drive for a visit. Since I sold my car – reasons for this are multiple, the biggest being that I felt that a car makes me sluggish – I took my motorbike and, looking at my leftover free days at work, decided spontaneously to combine this with a trip to France.

Started on a Saturday, boring highway drive to Wiesbaden where my sister lives, Sunday continuing to Stuttgart where a friend of mine lives, also boring highway stuff, This was mainly because of bad weather, which brings up one of my rules for motorbike driving:

If there is shit weather, I take the fastest, easiest route possible.

Driving through rain, wind, cold is somehow satisfying when you arrive and may even has its beautiful moments (driving through a foggy forest with some rain is just gorgeous, believe me) but there no need to extend it. The stamina and concentration drain are not worth it. There are few exceptions but in general and especially on longer tours driving in shit weather just sucks.

Anyways, Monday I took the long haul from Stuttgart to Grenoble (where another friend of mine lives), 700kms, mostly land roads, 11 hours in the saddle and it was wonderful. Navigating, overtaking, gorgeous nature, city traffic, cigarette breaks at fuel stations, a bikers wonderland.

Next day, Tuesday that is, I drove to said Gorges du Verdon – for the Mappies among you: via Briancon

Dinge-Les-Baines – and this, hands up, was one of the best days I ever had on a bike. Such an ethereal landscape, such good conditioned roads, such a nice traffic (meaning very few ‘obstacles’ like trucks, slow-drivers, crazy maniacs) I´ve had very seldom in my career.

This brings me to two more rules:

First, if you have the time for a scenic route, take it, no discussions. (For those of you who still use printed maps, the scenic stuff has a green band beside the road

Second, but this is a bit specific: Overtake trucks whenever you can. The are sluggish monsters which take away your sight, move slow through towns and sometimes stink. Don´t get me wrong though, I feel somehow connected with truckers, we are both heroes of the road, but their vehicles are just…

and then continued towards the jet-set area of Nice, Cannes, Saint-Tropez taking a small detour through the mountainous hinterlands where Brad Pitt, Cate Blanchett and their buddys take a stroll during their hard-earned free-time.

Again, very nice driving and I think I earned a 1000-serpentine-badge during that morning, but only the wooden one since neither my bike nor me are carved out for this – me, I´m too cowardly a driver for speedy bends and my bike may be perfect for anything else, but moving this heavy overpowered battlecruiser through tight curves is not what shes meant for.

Anyways. The sea road from Nice up to Toulon is really pretty

but I give that piece of driving a clear 3 out of 10 and that only because of the partially nice vistas. The traffic just sucks, no flow, just going slow, stopping, going slow, all with 30 degrees and in full gear. Also motorbikers dont seem to greet each other (usually you wave your left hand when another biker passed you); and the Vespa drivers are a nuisance (most of these have three wheels there, two at the front, which gives more stability, but is clearly made for elder people or wannabe-bikers, I don´t know). So, no nice time there, especially after the gorgeous vistas the day before.

Small sociological detour now. This area carries an aura of rich people, film stars etc. When looking around I mostly saw old people there, some wannabe-rich-types, few obviously rich guys (I saw some 6, 7 Ferraris or Lamborghinis, don´t nail me on the type, taking a tour but that was in the hinterlands.) And I asked myself where all the normal people are living. Even rich persons need plumber, need food, need their excrements taken care of and I don´t think that all their bakers, carpenters etc. are millionaires themselves. So, are there gated communities for the “poor”? Don´t think so. Also there are not really any cheap looking areas around, everything looks quite posh. So, to me there are only two possibilities: Normal people pay abhorrent rents which eat up most of their income leaving them without any possibility to ever taste the luxury they cater for each day and maybe not even being able to live a financially stable live. Or, the live so far away that they have to travel a lot, which ends up at the same plus would explain the traffic situation. Anyways, what I originally wanted to point out is that you either belong to the rich class or the poor class and there is no way to switch, the rich will see to it.

Ok, that Marxian thought was not carved out very well, but its 10 oClock and I´m done in for today after 10 hours of riding.

One last thing though. The place where I´m at is called La Fenouiellere in the small town called Estezargues near Avignon. I spent a holiday here with my mother and my sister in 2001 and as far as I remember had a really good time back then. This is what the old remembrance part in the title refers to. But actually now I feel… nothing. 17 years is a long time… strange.

Ahh, Le Mont Ventoux, Le Geant de Provence. This mountain sits atop the Provence, a coastal, flat region, on the way to the more hilly and then mountainous regios to the northwest. The mountains measures 1.912m and is famous, infamous and legendary amongst cyclists.

Many battles of the Tour de France have been fought there and having cycled up this huge hill will earn you a badge. Maybe I´ll do that in coming years. Not going to be easy though, on a motorbike it took me 30 minutes more or less at slow cruising speed and always upwards, on and on through the forest first and then through a moon landscape, only with the sun firing at full speed. And if theres no sun, theres wind or rain or storm or snow. I think going up on a bicycle is a test of endurance and how far you can push your body, it a mind thing.

Compared to the Gorges du Verdon this gorge is less dramatic, but who am I to compare beauty..?

I continued on to Grenoble via the Vercors, a mountainous region which was one of the important centres of the Resistánce during WWII.

Spent another nice evening at Stephane´s place and then drove the next day back to Stuttgart, another 700kms roadtrip frenzy – was a good one if I remember correctly.

ps. I´m finishing this only half a year later (i´m a lazy bugger) so please excuse the short finish, I just wrote it now.

Why today? Because since today, it happened during the drive back from Easter at home, my machine has 50.000km on the clock, no small feat I think. And still running like a charm, like in all those 6 years ago.