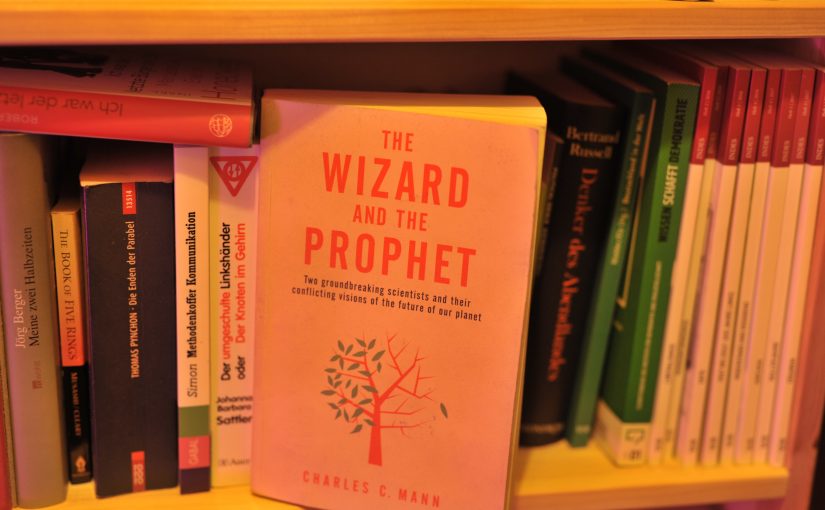 Excellent book, but only for specific readers.

And no, it not a fantasy novel. (By the way, my favourite fantasy book is – sorry for being conventional – ‚Lord of the rings‘. Although I have to admit that fantasy is not my most read genre, maybe because of Grandmaster Tolkien…)

Charles C. Mann is journalist and author and did some thorough research for this one. It is a mix of 2 autobiographies, science, philosophy and politics and circles around one question: How can humanity provide food for 10 million people in 2050?

He does not give an answer to this question but rather shows the approach from two opposite school of thoughts. On the one hand we have the ‚wizards‘, the agroscientists, which believe that this problem can only be solved by raising the efficiency of agriculture. On the other hand we have the ‚prophets‘, the environmentalists, who say that humanity has to reduce consumption and generally speaking has to make the world a more ‚green‘ place.

To delve deeper into these two contradictory approaches he autobiographs two exemplary, relatively unknown persons: Norman Borlaug and William Vogt, the former being the ‚father‘ of agroscience, the latter being the ‚father‘ of environmentalism (well, in the eyes of Mann of course, but he may not be far off). So the first part of the book is about the life of these two men, from childhood to death with an emphasis on how they found their believes and grew into their fields of study. And these two stories alone would make excellent books. Mann seriously has a hand for writing.

The second part explains the scientific backgrounds for the schools of thoughts, never losing touch with Borlaug and Vogt and also details the political, environmental and economic influences on the topic of environmentalism. I think you may find flaws in some of the facts and argumentation chains but overall this also would make a very good book on the topic.

If there is one thing I would critizise it is that the book is in parts dry and stiff to read. Overall it is exemplary for illuminating all aspects of one of the most important question mankind has to solve. As I said, he doesn´t answer the question, he doesn´t take sides (which is another excellent feature of this book). The question of how to feed the world may be far off the normal lives we all live (like climate change) but if you want to have an understanding not only of the scientific framework but also where the mindsets of protagonists from both sides come from – this is the book you have to read, no doubt.