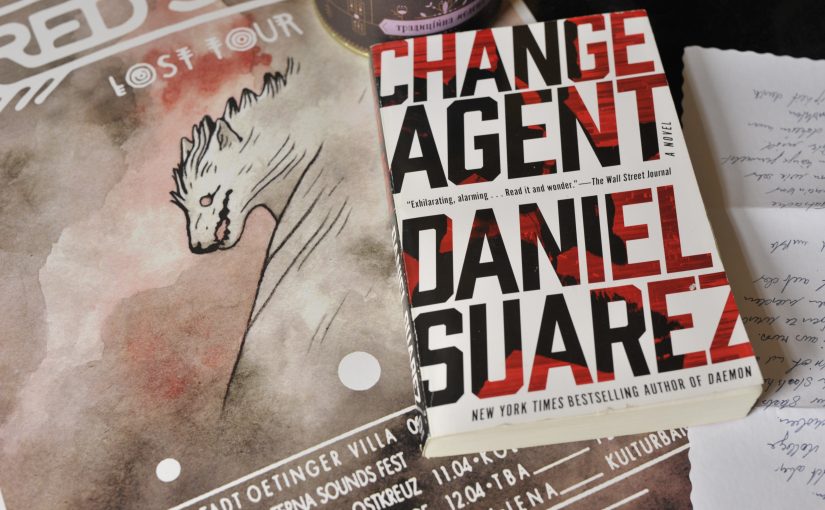 Daniel Suarez is IMHO the best and most important contemporary science fiction author.

His books all deal with relevant tech topics and their consequences on the future of mankind, nothing more, nothing less. Reading his books is not like ‚oh, that was nice entertainment – next‘ but rather ‚Daniel, thats a rather fictinous story you spun there, but it´s still fiction. Or not? Could such things eventually happen?‘

His first book, „Deamon“ deals with an AI influencing the real world, „Freedom“ a follow-up to that. „Kill Decision“ is about autonomous drones and is scary as hell. In „Influx“ scientists which discover breakthrough technologies are adbucted by a secret organization.

All books share the same action-paced, story-driven style, the stories itself make sense and are conclusive. His character development is not the best and the reader should not expect much poetry, this suffers from his action-focused style, giving the books a certain B-movie pulpy feel, so it´s more cheeseburger than dry-aged rib-eye slowly grilled, he surely doesn´t play in the same league as William Gibson or Thomas Pychon. I surely like his style though.

What he does incredibly well is world-building. His worlds are full with technologies which are in development in the real world or could be invented in the future. For example in „Deamon“ HUDs are a common thing; the book was written at a time when Google Glass was a mere speck on the horizon. In „Change Agent“ genetic alterations are common, in the real world, well you know the discussions about designer babies from China… His books are full of that and he casually mentions such technolgies, he doesn´t even rub it in. It´s just great. This gives him a very inventive (you could even say prophetic) touch, his books are thought-provoking and go beyond the stories. He shows a could-be world with all the positive and negative consequences on society, human development, politics etc. and in my opinion this is what sciene-fiction is about (at least the ‚real-world‘ science fiction, for the ‚Star Wars‘ science-fiction other rules apply): to show the dangers and benefits of technology, bring it on the radar and start a discussion about it.

„Change Agent“ is his best book beside „Deamon“ book, I think. The topic is gene-editing and he thinks it beyond eradicating inheritable diseases or attribute enhancement via embryo editing, in fact these things are common in the world he creates.

The story centres about a criminal organization which developed a way to … Sorry, no spoilers today. I want you to read it. In fact, I´d say that with „Change Agent“ there is now no way round Suarez when it comes to contemporary sci-fi. This one and „Deamon“ are must-reads if you´re into it. No excuses. You can thank me in 30 years when you´ll say about a technology: ‚I´ve read about this some years ago. Where was that? In the newspaper? No. a company brochure? No. Ah, now I remember – it was in a Suarez book.‘