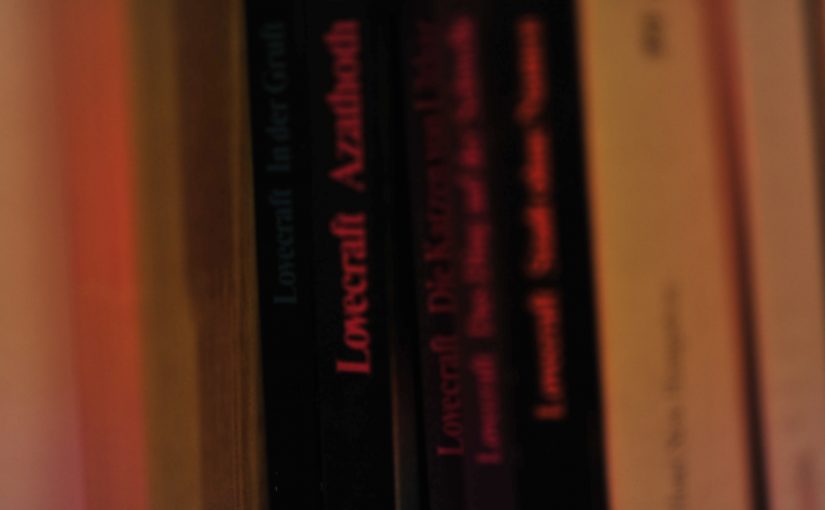 In my student days I read some books from H.P. Lovecraft, mystery horror storyteller, creator of the Cthulhu Mythos and as I was browsing through my books to look for something small, unnerving to read I gave „The mountains of madness“ a shot.

If neither Lovecraft nor Cthulhu rings a bell then rest assured that you haven´t missed anything. But he, his writings and also the works of contemporary writers (actually the myth was a product of writers who were inspired by Lovecraft but since he is the centre of gravity around which everything circles it is rightfully attributed to him) have some kind of worldwide fanbase among horror and scifi fans it seems. Why is that? Actually I don´t know, but what is clear is that Lovecraft was the first writer (or at least the first I can think of) who created something like an alternate history of earth, that earth has been visited and colonized millions of years ago by ancient beings from outer space who are more or less godlike creatures. (Ok ok, I can hear you say, what about greek mysticism?, Zeus and all?, what about Jehova?, God?, this is also alternate history in a sense. Yeah thats soemhow right but these religious figures were created for another purpose; best case: to teach people ethics; worst case: for control. Anyways, lets not compare religion with fantasy.) These creatures have been here, founded cities (enourmous ones), colonized the earth and fought wars, against other creatures or struggles happened between different parties, Elder Gods, Old Gods, you know the stories. He also inspired other writers to contribute to these myyths and although they had a very small base of readers, he gained reputation amongst these people. So, creating a new topia in the fantasy genre, inspiring other to contribute, these would be my explanations that Lovecraft and the Cthulhu Mythos still persist today.

Ok, so what about the works in literture terms? Two things first here: I only read „Mountains of madness“ („Mom“ from here on) and would not like to judge on one book alone (but its uncertain that I´ll read another one); and fantasy and horror is definetly not amongst my liked genres, not far off maybe but I´m no expert here.

Storywise, in „Mom“ we have a scientist who leads an expedition to Antarctica where the group of scientists discovers some old mysterious artefacts, later half the camp gets massacred and the protagonist and a colleague discover a huge and very old city where in the end they meet one of the elder beings or better, one of their creatures, a Shoggoth, which were created as workforce. Turns out this Thing was responsible for all the deaths and both the scientists barely manage to escape. Quite the standard story and from what I know this pattern is canonical for Lovecraft: a scientist discoveres traces of the ancient beings and gets mad or killed. Not too shabby for a fantasy story, actually quite good if you ask me.

His style is also interesting because he weaves science into his story, in „Mom“ you can learn about navigation, geology, biology and some other stuff. But concerning creating tension he cleary lacks something but I don´t know what it is. This book is definetly not a horrific experience, I guess a hardcore horor fan will fall asleep after 5 pages. Lovecraft is often compared to E.A. Poe because they share the same genre, but I assume that Poe has a different style because otherwise he wouldn´t be that famous. But again, I haven´t read Poe so this is all assuming.

Anyways. Lovecraft deserves credit for creating a myth which persisted for more than 100 years now and I guess requires creativity, persistence and passion to write your own stories in a different style than the common ones, these which sell and for this he has my respect. And although the books are outdated and raise no hairs, they are not bad either. If you are into dark fantasy mystery and not so much into Tolkien style elven stuff then you can give Lovecraft a shot.