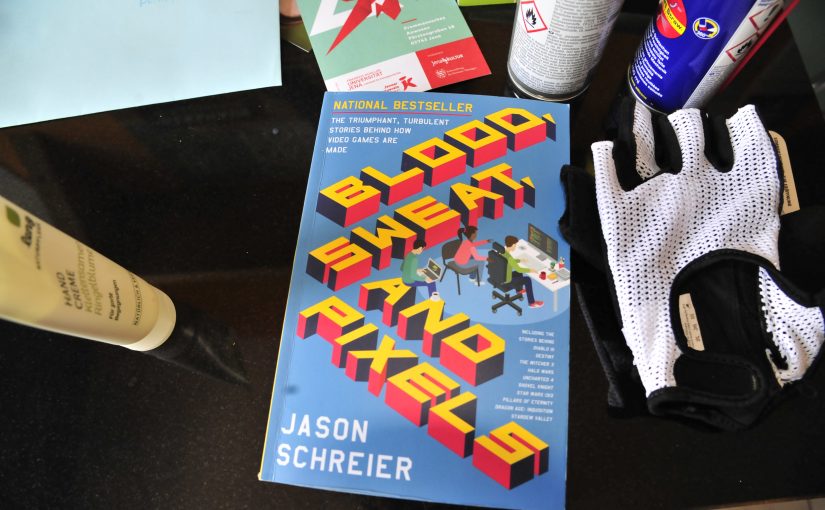 Having been a gamer since my youth in the early ninetees and still (and always will I guess) using gaming as one of my sources for entertainment I am also interested in other aspect in the cosmos of gaming, like psychological effects, the technology behind it or computer games as a form of art (they definetly are an art form in my eyes). To grab this knowledge the internet offers a huge pool of sites dealing with almost all of it. One of these sites is kotaku.com which mostly has the common nerd stuff you´d expect but there was this one author and a series of articles which got my attention and as soon as I found out that Mr Schreier put this together in a book, well… he sold one more.

The book decribes in 10 chapter the creation of 10 games, from idea over producing and finalizing to aftersales. Amongst the games are bestsellers like Diablo III or The Witcher and quite unknown titles like Stardew Valley. The range of the studios goes from sole developer to 400 people corporations like Bioware or CD Project Red. The author got his information from interviews conducted with employees or even managers of the studios and writes some story around them, more or less free from ideology, its the work of a journalist, very nicely done.

After reading the book one thought which I always had in my mind got amplified: Art and money-making with a schedule never go hand in hand, one part has to make compromises. This is why I could not imagine to live from art I create. I know how difficult it is to create something, on some days it flows but sometimes nothing goes, creativity cannot be forced. In game creation the studio sets the timeframe and the budget for the artists, things start with high ideas and in all of the example Schreier writes about something goes wrong in the middle and things are delayed, but milestones have to be met for financial sake and at the end the employees suffer from being overworked because of crunch. Definetly not a fine business it seems. But on the other hand what he also heard from some people working in this industry is that they could not imagine doing something else less stressful. Some of these workers (I don´t know how many, Schreier writes „many“, but I think its difficult to guess) say that although they can forget about having a normal life for months, although they haven´t seen daylight for weeks, although they got mental problems as a result of this unhealthy work-life balance, they love their jobs – hard to grasp at first but I can understand what they mean. The feeling of creating something with your hands or your brain can be so extraordinary that you´d be willing to pay a very high price for it.

So, its definetly a niché book but if you´re interested in things around gaming and want to know how these are produced (maybe you always thought like me that games are developed by a group of nerds locking themselves into their cellars and after 3 months the newest sh.. is published) this is a must read. And actually because it so well written I´d also recommend it to casual readers who want to read something about the art industry.