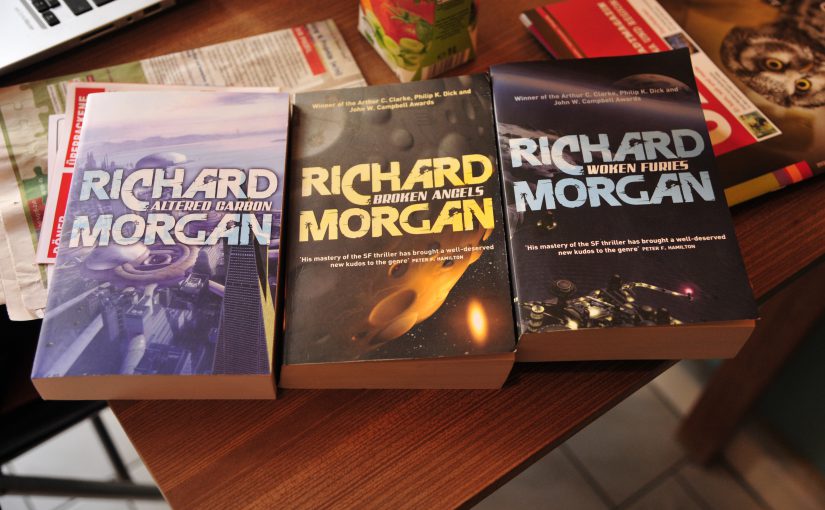 Well, well, Richard Morgan and his Takeshi Kovacs. These books have blown me out of the window together with the interior of the whole damn room. On my all time favorites list this trilogy would at least be in the top 10. It cannot gamble with “Ulysses”, “Lord of the rings”, “Das Boot” or “Bleeding edge” sure but after these there are a few candidates and Morgan is one of the better ones.

The books are called “Altered carbon”, “Broken angels” and “Woken furies” and are of equal quality, both all three compared and also in each book, you won´t find major divergences from the middle line, which means that if you read 50 or so pages of one book you know what the rest will be like. But this only refers to the style in which the book are written, storywise it´s only one direction – forward.

The story is about Takeshi Kovacs, an ex-black-ops special-force soldier (think of a mixture of James Bond, Jason Bourne with the unscrupulousness of the T1000) and plays several hundred years in the future. Technology has advanced to a point where the whole human brain can be downloaded into a stack and therefore be transferred into a new body. This implies that people are basically immortal. Also space travel and planetary colonization is common, the three books play on three different planets. There is an extinct race of extraterrestrials in the books (“Martians”; winged creatures, but technologically advanced. They have been able to travel space and construct advances weapons etc.) but they only play a minor role, most of the story is human-centric.

The first book, “Altered carbon”, plays on Earth where Kovacs uncovers a ploy amongst the rich. In the second book “Broken angels” he leads a group of mercs and scientists on a war-torn planet on an expedition to uncover martian secrets. In the third book “Woken furies” he is back on his home planet (hundreds of years after his birth), has an encounter with a feminist-religious rebellion leader long thought dead and teams up with old mates to free her from the hands of the ruling family. This book has an exceptional ending.

All of these are full of fast-paced action, violent shootouts and killing, philosophy about society, friendship and life in general, meager dialogues, the occasional (very explicit) sex-scene, all in all very hard-boiled literature, certainly nothing for the faint-hearted.

I´m not sure why I´m so fascinated by these books, but ok, I certainly like when a book has action in it, when the story is pushed forward without much hesitance, when there is some philosophy in it, when there are no long passages of lets say landscape descriptions, also to me most of the characters don´t need depth, I´m fine with stereotype descriptions of thugs, prostitutes, the rich etc. Add to that the sci-fi scenario and basically thats it. These books got me.

Also these books bring up something inside me which is a bit scary and that is the lust for violence, or better said I don´t mind reading about the violence displayed in the book. Now, I´m a very peaceful person and do definetly not enjoy watching horror movies or shit like that. But when reading about it, fine and entertaining – scary, as I said.

All in all, if you want to read some sci-fi and don´t mind the above said things give these a try, I promise you´ll not be disappointed.