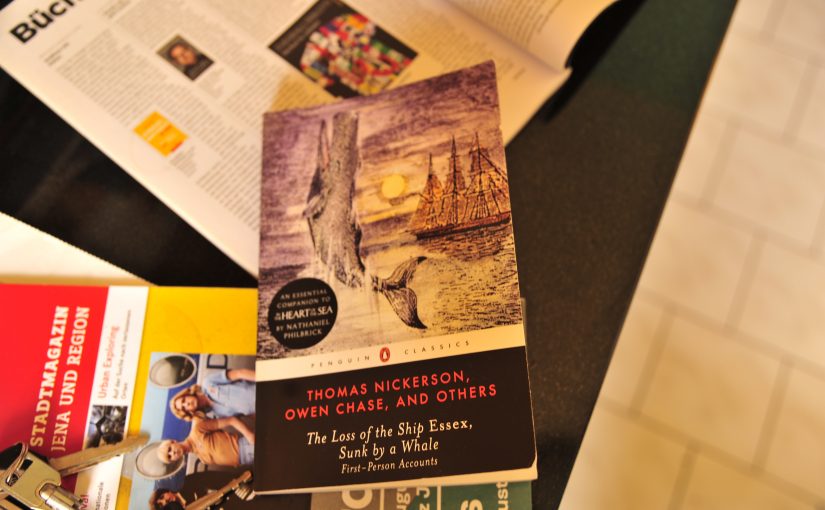 What a title… sounds a bit scientific and indeed this is not a novel but contains first-person accounts assembled by a historican, it´s a historical book, a true story. I was a bit sick the last days and besides work was more or less spending my time in bed and this was on top of the shelf so yeah, why not read something about survival on the sea?

The background is told quickly and basically the title tells half of it. The whale boat Essex is attacked and sinked by a sperm whale in the middle of the Pacific Ocean and the 20-man crew travels 4,000 something miles in the byboats for 3 months till half of them are saved, the rest dies on the way. There are two narratives in the book, one by the first mate Owen Chase and one by the cabin boy, the 17 year old Thomas Nickerson. Chase´ accounts refer extensively about the time after the destruction of the Essex and is at times unbearable to read, how these poor souls have to ration food and water, how they land on an island only to find no fresh water and most cruely how they, to survive the last days, have to resort to cannibalism. It is a testament to how far one can suffer, how deep the survival instinct is rooted in man. Nickersons story is more shallow, focusing more on the time before the sinking, which port they were at, people they met and about whale hunting in general. Interesting somehow but nothing to be hyped about.

If you think now, sperm whales? sinking ship? wasn´t there some other, much more famous book called „Moby Dick“? you are definetly right. Herman Melville was to some (small I guess) extent influenced by Chase´ story, there are even some annotations from Melville in this book and in „Moby Dick“ he refers to the Essex at one point. The Essex disaster happened 30 years before „Moby Dick“ and was a big thing in the whaling community so this makes sense. But of course „Moby Dick“ is a different thing, a great story about revenge, stubborness, death.

Small excursion now. I actually don´t know how I got hold of this book or why I wanted to read it but I assume it had to do with a concert I visited in February, the band called „Ahab“ (who is the captain and main protagonist in „Moby Dick“) was giving a show here in Jena. (by the way, I´m thinking about opening up a new category here called Music where I write some concert reports.) So, „Ahab“ are a doom metal band, pretty sinister, but veeeery slooooww metal with growling, very niché. Their albums are always concept albums meaning they circle around one topic or in this case books, their first album is about said „Moby Dick“ for example. Anyways, I attended metal and hardcore and other concerts but doom was new to me and I was completely blown away. The music itself is not very complex or intriguing but the atmosphere it creates is fu…g intensive, very emotional. So, what was I saying… Ah, yes, I would not recommend listen to music while reading since it distracts too much but in this case, reading this book and listen to „Ahab“ makes perfect sense.

Ok, „Sinking of the Essex“, do I recommend it? Not really. But it´s also not a bad book, you fever with these guys, suffer with them and get to know something about the early 19th century and of course, its a first hand report so pepole actually lived through this sh.t.