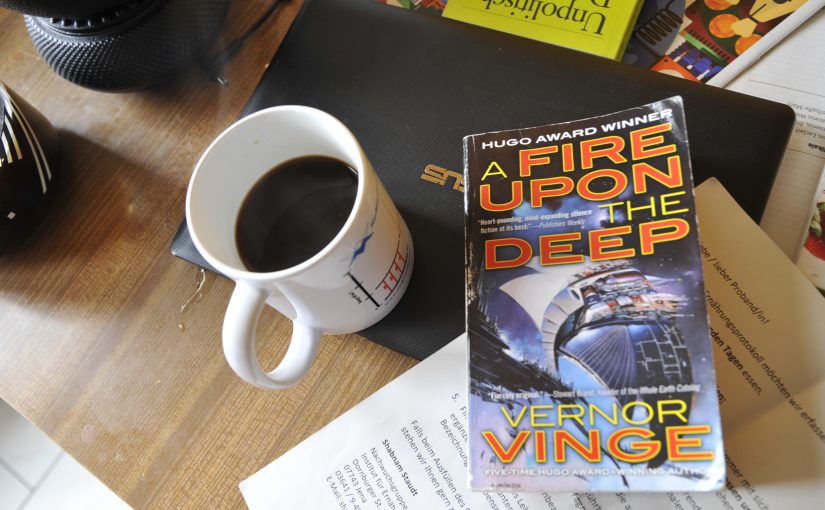 Are you in for some old-school sci-fi?
Written at the beginning of the 90s by mathematician Vernor Vinge „A fire upon the deep“ can be put into the subcategory „Space Opera“ and is a well-written book – I definetly enjoyed reading it. Vinge doesn´t put emphasis on developing concepts of high-technology, has no direct, raw spelling, doesn´t create superheroes or supervillains – no, he tells a story set in a sci-fi environment which encompasses the large (a mysterious power about to destroy the whole universe and a small motley crew fighting to prevent this) and the small (the story of two children being stranded on a medieval world of dog-like creatures… seriously!) scope. Actually this is a book I´d rather recommend for children aged 12+ than for adults to read because reading it spurs your imagination, two of the main characters are children and it is urging you to read on. Also it doesn´t contain much violence (and definetly no brutal hardcore shit), no sex scenes – actually, if I put it on a meta-level regarding these two plus storytelling abilities, character conceptualization and scope of the story I´d compare it to „Lord of the rings“. No, seriously, the setting may be completely different, it doesn´t contain a truckload of characters or even author-created languages but still – it sucks you in, telling an interesting story… Good book.